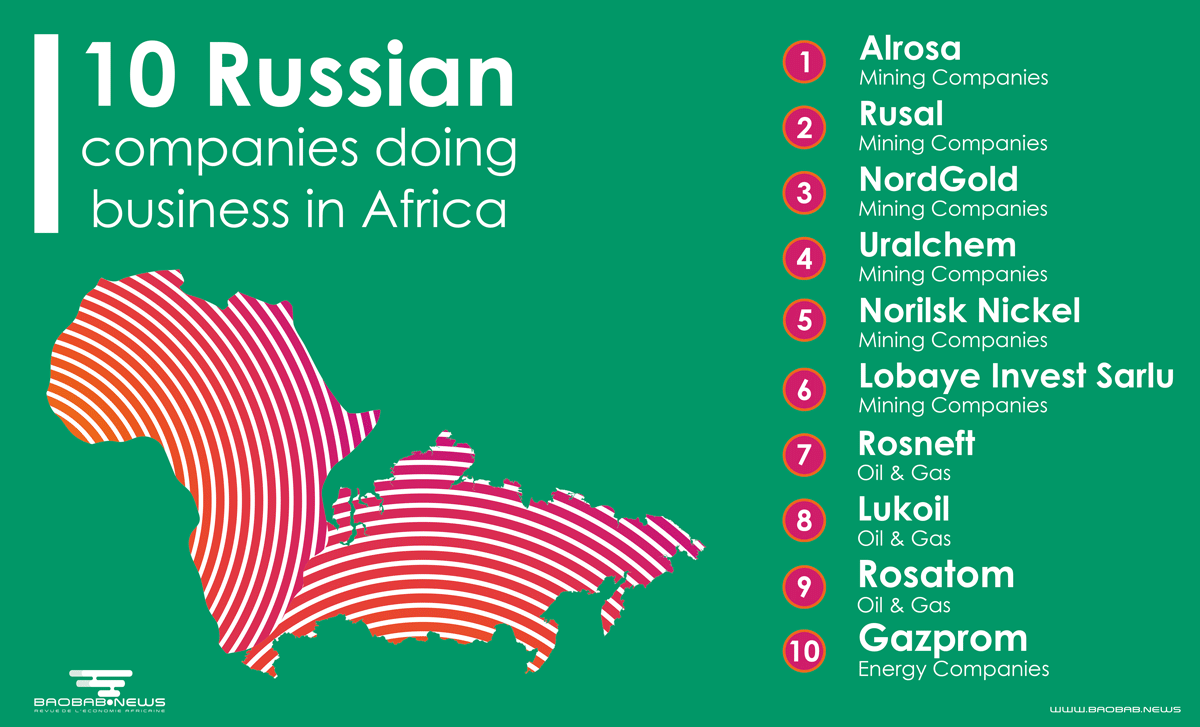 Rich in mineral, oil and gas resources, Russia has significant expertise in the field of extractive industries, currently deployed in Africa through several companies. Paving the way for the return to Russia in Africa, these companies spread over several countries are distinguished by their size and financial weight.

With the Sochi Summit ending on October 24, Russia is returning to Africa, where its companies are well established. It must be said that the federation multiplies partnership projects throughout the continent. Cooperation of both political, security and economic including Zimbabwe, Congo , South Sudan, South Africa, Sudan, the Central African Republic , Namibia, Madagascar, Angola,Algeria , Gambia, Botswana . Lesotho, Egypt, Ghana, Nigeria, Burkina Faso, Botswana, Mozambique, DRC, the Burkina Faso. In terms of investment, Russian companies are spearheading Moscow on the Continent with a predilection for the hydrocarbons and mining sector. They invest in prospecting and develop onshore and offshore gas and oil projects , ores and metals: copper, gold, platinum, cobalt, coltan, iron, manganese, nickel, palladium, rare earths, etc. . In Africa, the Russian strategy is supported by the implementation and development of five pillar mining companies.

Alrosa  : Considered the world’s leading diamond producer, the Russian Alrosa started in 2003 the development of the Catoca mine. A joint venture with Angolan state-owned company Endiama, Brazil’s Odebrech and Diamond Finance Group. The mining company that signed a memorandum of understanding with Angola in April 2019 to strengthen its presence, also operates in Botswana, through Sunland Minerals, a joint venture with the British company Botswana Diamonds Plc. Alrosa started in 2012 geological research in Zimbabwe, long delayed by the political context. In 2018, as a result of the political alternation, Russian Mining Company has developed a joint venture in Zimbabwe for diamond exploration. Founded in 1997, Alrosa, present in several countries with a workforce of 40,000 employees posted a turnover of $ 4.1 billion in 2016.

Rusal: Aluminum giant Rusal is currently mining bauxite in Guinea. Rusal has more than 40 assets in 13 countries on 5 continents. It is one of the world’s leading producers of aluminum and alumina. The company employs nearly 64,000 people worldwide, and its assets include 10 aluminum smelters, 8 alumina refineries, 7 bauxite mines, 4 aluminum powder mills, 2 silicon mills and 4 sheet mills, according to his own figures. In 2018, Rusal boasts about 5.86% of world production of aluminum and 6.2% of alumina.

NordGold  : The company of Russian origin has mines and development projects, as well as investment projects in 6 countries includingBurkina Faso and Guinea where it operates respectively the Taparko, Bissa-Bouly and the mines Tefa 700 km north-east of Conakry. According to the group’s annual results in 2018, refined gold production was 907 thousand ounces last year. The mining company created in 2007 by the Russian steel specialist Severstal employs around 8000 people worldwide.

Norilsk Nickel:It is a Russian group operating and smelting nickel and palladium. The company, which claims to be the world’s largest producer of nickel and palladium, also produces a large number of by-products, including cobalt, rhodium, silver, tellurium, selenium, iridium and ruthenium. MMC Norilsk Nickel (Nornickel), had taken a stake in the Nkomati nickel and chrome mine in South Africa and Tati in Botswana , where its investments have generated litigation. Consolidated sales of the group in the first half amounted to $ 6.3 billion in 2019.

Lobaye Invest Sarlu  : The young mining company is mainly present in the Central African Republic. During the year 2019, the mining company obtained from this country assisted by Russia, a mining reconnaissance license in the region of Pama for a renewable year in prospecting for gold and diamonds. Previously, Lobaye Invest had obtained a gold exploration license in the Yata areaover a renewable three-year period.

In the hydrocarbons sector, Russian investments are supported by a trio of oil and gas majors.

Rosneft: It is the leader of the Russian oil sector and the largest public oil and gas company in the world. It specializes in the exploration and evaluation of hydrocarbon deposits, the production of oil, gas and gas condensate, offshore development projects, the processing of raw materials, the sale of oil, gas and refined products. In 2019, Rosneft signed a memorandum with the National Hydrocarbons Corporation of Mozambique (Empresa Nacional de Hidrocarbonetos EP, ENH) to develop natural gas fields in Mozambique where it won a tender in 2015. The excellent relations between two countries was illustrated by the visit in August of Mozambican President Filipe Nyusi to the Kremlin. The company is also present in more than 24 other countries has an estimated turnover of $ 94 billion in 2017.

Lukoil: This is the other big Russian company beneficiary of the expansion of Moscow in Africa. During the Congolese President’s visit to Moscow at the end of May this year, Lukoil signed a letter of intent with the Congolese state-owned oil company SNPC. It has acquired a $ 800 million stake in the Marine XII license off the coast of Congo. Lukoil also had to invest in Cameroon, Nigeria, Ghana and Egypt. It is one of the largest vertically integrated and publicly traded oil and gas companies in the world. The company accounts for more than 2% of global oil production and about 1% of proven hydrocarbon reserves and employs nearly 100,000 people worldwide, operates oil and gas in 10 countries, estimates annual business of about $ 80 billion in 2018.

Gazprom: The Russian company is present in Algeria, where it has discovered three gas fields as well as in Libya where its activities are largely stalled leaded by the armed conflict since 2011. The group also wants to participate in a project of construction of a gas pipeline linking Nigeria to Europe via Algeria. Gazprom International specializes in the implementation of Gazprom projects in the fields of exploration, exploration and development of hydrocarbons outside Russia. The gas company is present on four continents, 20 countries and develops about forty projects, for an estimated turnover of 126 billion dollars in 2018.

The various activities and investments of these Russian companies are part of the development of a global ecosystem, marked by the will of the Russian Federation to strengthen its presence in Africa. It includes energy development through civilian nuclear power via Rosatom, security cooperation through the sale of arms and the implementation of military bases , private security companies and a return to education through the training of managers as in the time of the USSR.