August 10, 2022
Home Baobab How are citizens affected by corruption in Africa ?

How are citizens affected by corruption in Africa ? 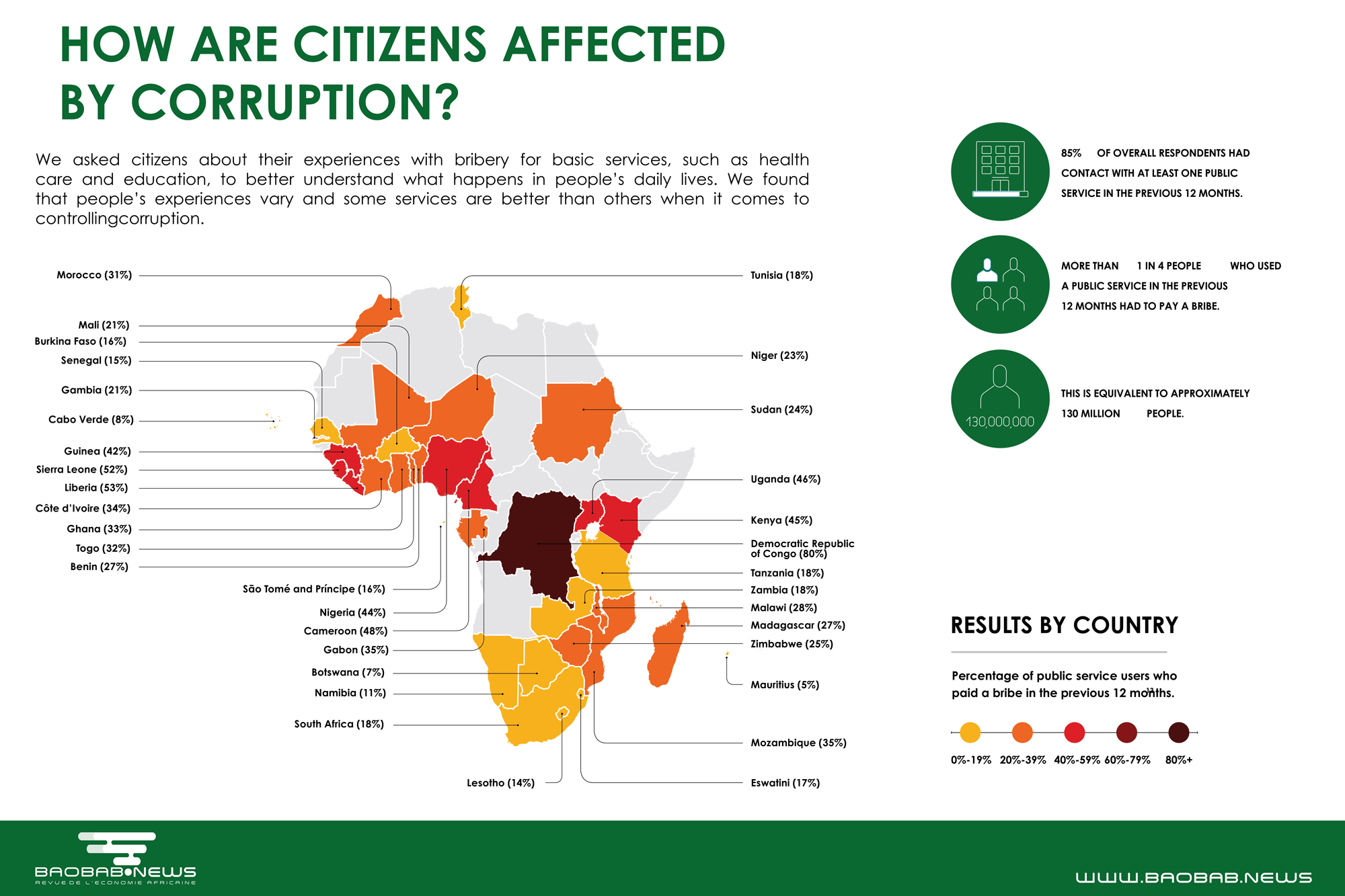 We asked citizens about their experiences with bribery for basic services, such as health care and education, to better understand what happens in people’s daily lives. We found that people’s experiences vary and some services are better than others when it comes to controlling corruption.

We asked respondents whether they had contact with five key public services in their country in the previous 12 months – police, health care, schools, ID documents and utilities. We then asked whether they had paid a bribe, given a gift or done a favour in order to get the services they needed. Eighty-five per cent of overall respondents had contact with at least one public service in the previous 12 months. The results show that of those who had contact, more than one in four people (28 per cent) paid a bribe in the previous 12 months for basic services, like health care and education. This equates to approximately 130 million people across the 35 countries surveyed who paid a bribe in the preceding year. The Democratic Republic of Congo (DRC) has the highest overall bribery rate (80 per cent), followed by Liberia (53 per cent), Sierra Leone (52 per cent), Cameroon (48 per cent)
and Uganda (46 per cent). Mauritius maintains the lowest overall bribery rate (5 per cent), followed by Botswana (7 per cent), Cabo Verde (8 per cent), Namibia (11 per cent) and Lesotho (14 per cent). However, even in these countries, governments could do more to stop bribes for public services.

Democratic Republic of Congo in focus

The DRC is one of the poorest countries in the world, despite having unrivalled natural wealth – particularly in the form of oil, gas and mineral deposits. Development in the country is significantly hampered by insecurity, conflict and mismanagement of natural resources. Public services are weak, underfunded and poorly run, making anti-corruption efforts severely challenging.

The police is the public service most likely to demand and receive bribes, which corresponds with our finding that citizens think the police is also the most corrupt institution in Africa. Public clinics and health centers, meanwhile, have low bribery rates, although 14 per cent of people who received
medical services in the previous 12 months paid a bribe to get the medical care they needed. Despite public clinics and health centers generally having low levels of bribery compared with other services, in some countries bribery in health care is a common experience. For example, in Sierra Leone,
50 per cent of citizens paid a bribe for medical care. This is followed by DRC and Liberia (43 per cent each). By comparison, in Botswana, only 1 per cent of citizens who came into contact with health centers or clinics paid a bribe, followed by Mauritius (2 per cent) and Eswatini (formerly Swaziland) (3 per cent).