CAN 2019: Who are the Highest Paid Coaches in Africa? 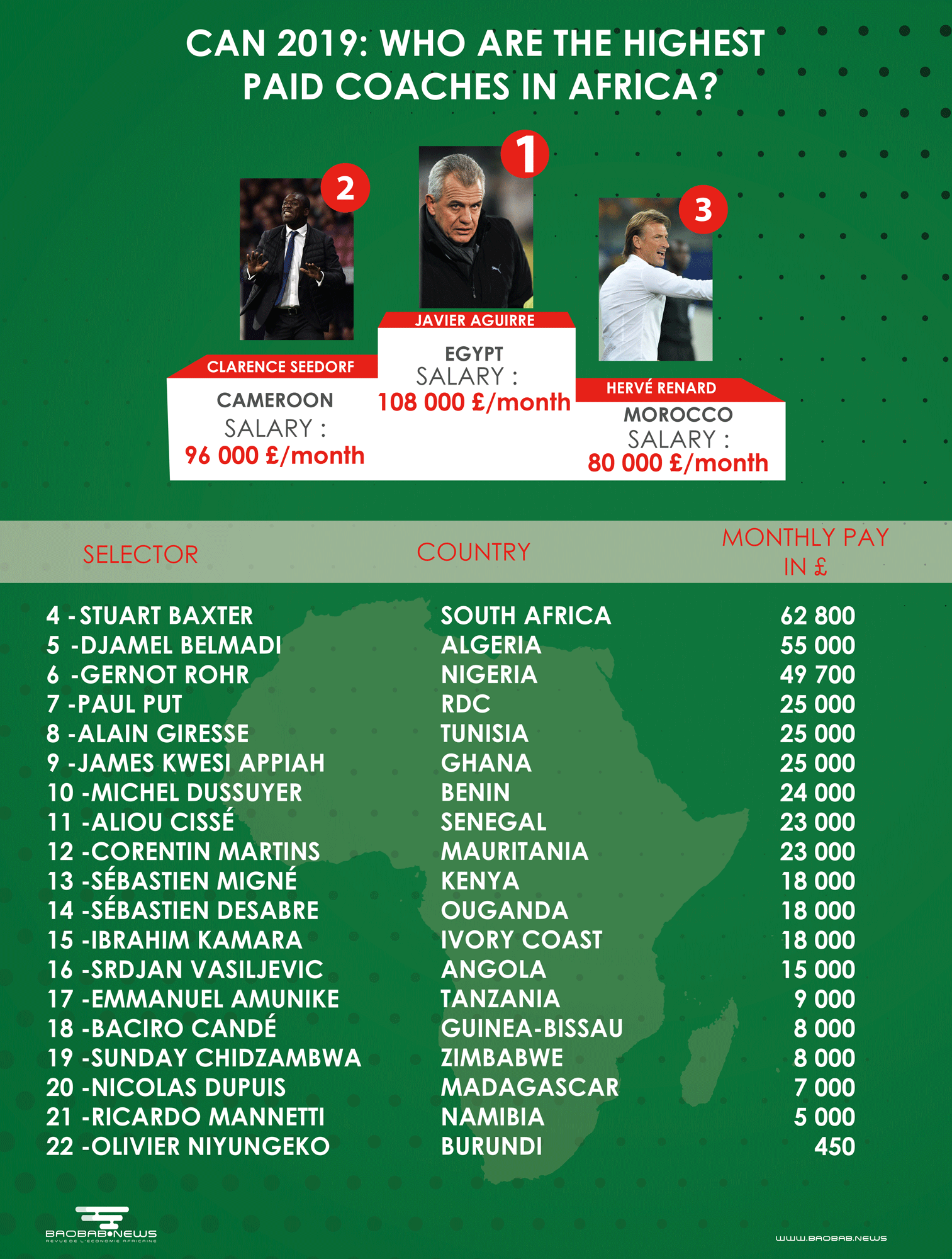 If we stick to the finalists of the Egyptian CAN, Javier Aguirre ahead of the Dutch Clarence Seedorf (Cameroon), paid up to 96,000 euros per month, followed by the French Hervé Renard (Morocco) , which reaches around 80,000 euros monthly. It is another foreigner, Scottish Stuart Baxter, who takes the 4th step of the podium, with emoluments estimated at 62,800 euros.

The first African to appear on this list is the Algerian Djamel Belmadi who, thanks to this single post, sees his bank account thicken every month about 55,000 euros.

Behind this top 5, the German Gernot Rohr (Nigeria) is in the high range, with 49 700 euros per month.

Behind, the Belgian Paul Put, finalist of the CAN 2013 with Burkina Faso, has signed a contract with Guinea guaranteeing him a monthly salary of 25 000 euros, the Frenchman Alain Giresse in Tunisia and the Ghanaian James Kwesi Appiah also pay 25 000 euros, just ahead of the Frenchman Michel Dussuyer, whose salary has been upgraded after the qualification of Benin, and who now receives 24,000 euros each month.

Aliou Cissé, who was a year ago the lowest paid coach of those participating in the World Cup in Russia, saw his monthly income increase from 16,600 euros to 23,000 euros, or as much as Corentin Martins in Mauritania.

Under the bar of 20,000 euros monthly appear the French Sebastien Migné (Kenya) and Sebastien Desabre (Uganda), with about 18,000 euros each month, like the Ivorian Ibrahim Kamara.

The Serb Srdjan Vasiljevic, at the head of Palancas Negras of Angola, collects 15,000 euros per month. Nigerian Emmanuel Amunike, coach of Tanzania, receives 9,000 euros a month, as much as Baciro Candé (Guinea-Bissau) and Sunday Chidzambwa (Zimbabwe) receive 8,000 euros – a little more than the French Nicolas Dupuis in Madagascar (7 000 euros).

At the bottom of the ranking, we find the technicians at the head of small federations without big means. This is the case of Ricardo Manetti in Namibia, which rises to about 5,000 euros per month. As for the Burundian Olivier Niyungeko, his monthly salary is 450 euros, which he can improve thanks to the match bonuses.