Doing Business 2019 : Africa is the Pioneer in Global Economic Powers 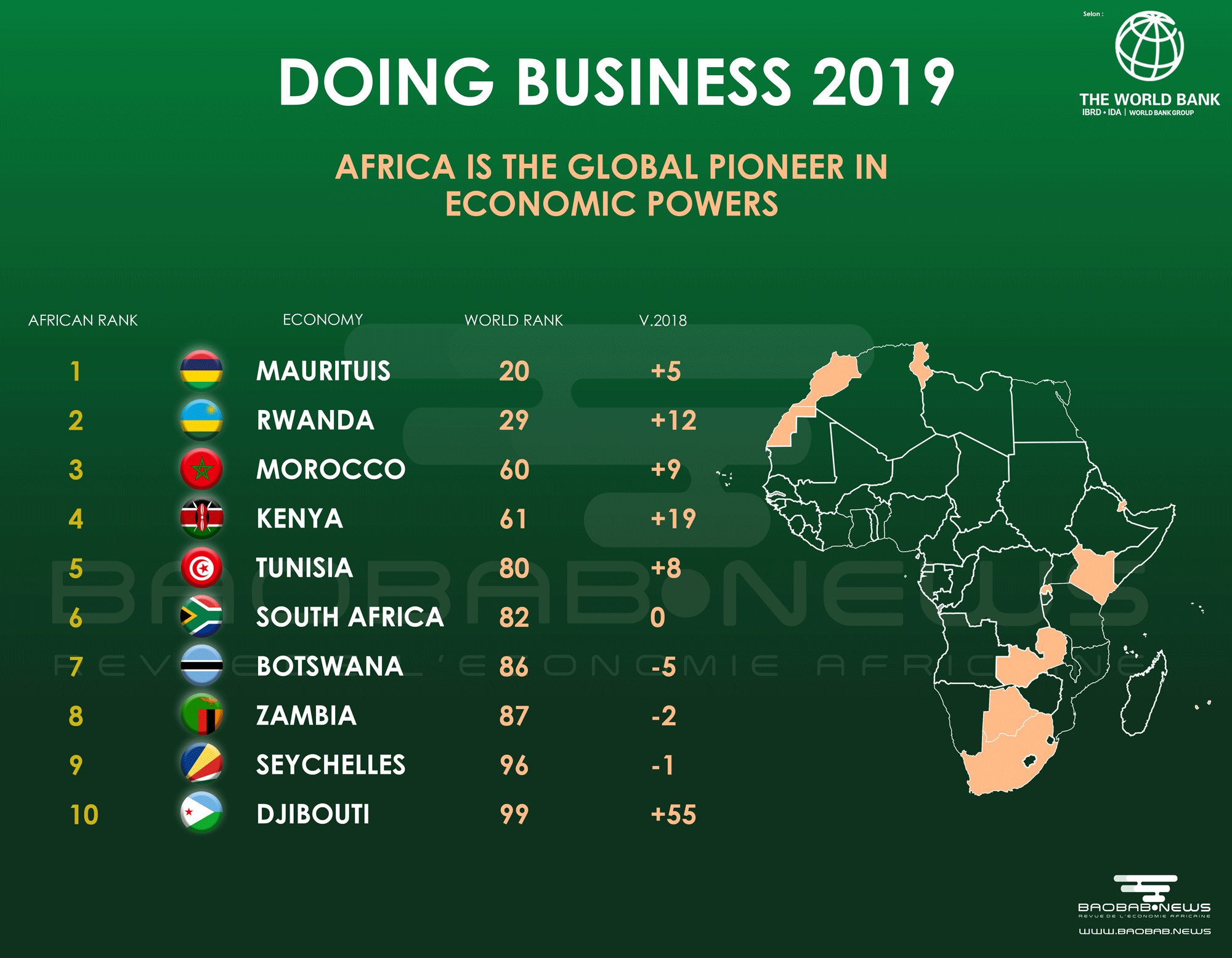 The Doing Business Index is a ranking system, created by the World Bank Group, which indicates the business environment of regularity. A higher rank, indicated by a lower numerical value, specifies a stronger protection of property rights, and vice versa.

The World Bank has been measuring the quality of the global economic environment for the past fifteen years using the Doing Business ranking system. More than 190 savings were examined on criteria such as: electrification and ease of business creation, tax burden and protection of property rights.

Following this criteria here are the top ten African economies, as ranked in the 2019 Doing Business report:

The World Bank revealed that Mauritius is ranked 20th in the world and 1st in Africa with a score of 79.58. The country ranks twentieth higher this year, compared to the Doing Business report of 2018.

With a score of 79.58 points (out of a total of 100), Mauritius has improved its ranking in eight of the ten lifestyle domains of the companies mentioned above.

Rwanda first appeared in the World Bank’s Doing Business report with a score of 77.88. Globally, Rwanda ranks 29th in the “ease of doing business” ranking, compared with 41st in last year’s report. In addition, the country has implemented 52 reforms over the last decade, which have significantly improved the business and investment climate. Notable reforms include improving the building permit issuance process by strengthening quality control during construction, with the introduction of risk-based inspections.

Mauritius and Rwanda nail France and Spain, but also Portugal, Israel, Turkey. As surprising as it may seem, in this group of countries behind Rwanda and Mauritius are Japan and Switzerland, two countries that are regularly cited as examples of governance.

This report ranks Morocco in 60th position with a score of 71.02 points. Morocco confirms its leadership position in North Africa ahead of Tunisia (80th), Egypt (120th) and Algeria (157th).

Kenya ranks 4th among African countries, ranking 61st in the world with a score of 70.31 points compared to the 2018 report, which ranked it 80th.

Tunisia, now ranked 80th in the world with a score of 66.11 points in the Doing Business 2019 report, has risen 8 places out of 88 in the 2018 ranking. After Morocco, Tunisia, the cradle of the Arab Spring is the second Doing Business country in North Africa.

With a score of 66.03, the 2019 report ranks South Africa 82nd. This country has always been Africa’s most powerful country in terms of tourist attraction, with millions of tourists visiting South Africa each year to enjoy its beauty. The government is striving to achieve the same status to attract foreign investors by providing them with various facilities to do business.

With a score of 62.02, Djibouti is ranked 99th in the world and 10th in Africa. Government officials are striving to improve foreign investment rates in the country, mainly in the tertiary and mining sectors. Djoubuti has gone from 154th position 2018 to 99th position 2019. This is a very recommendable increase over last year.