African Celebrities Who Own Private Jets ! 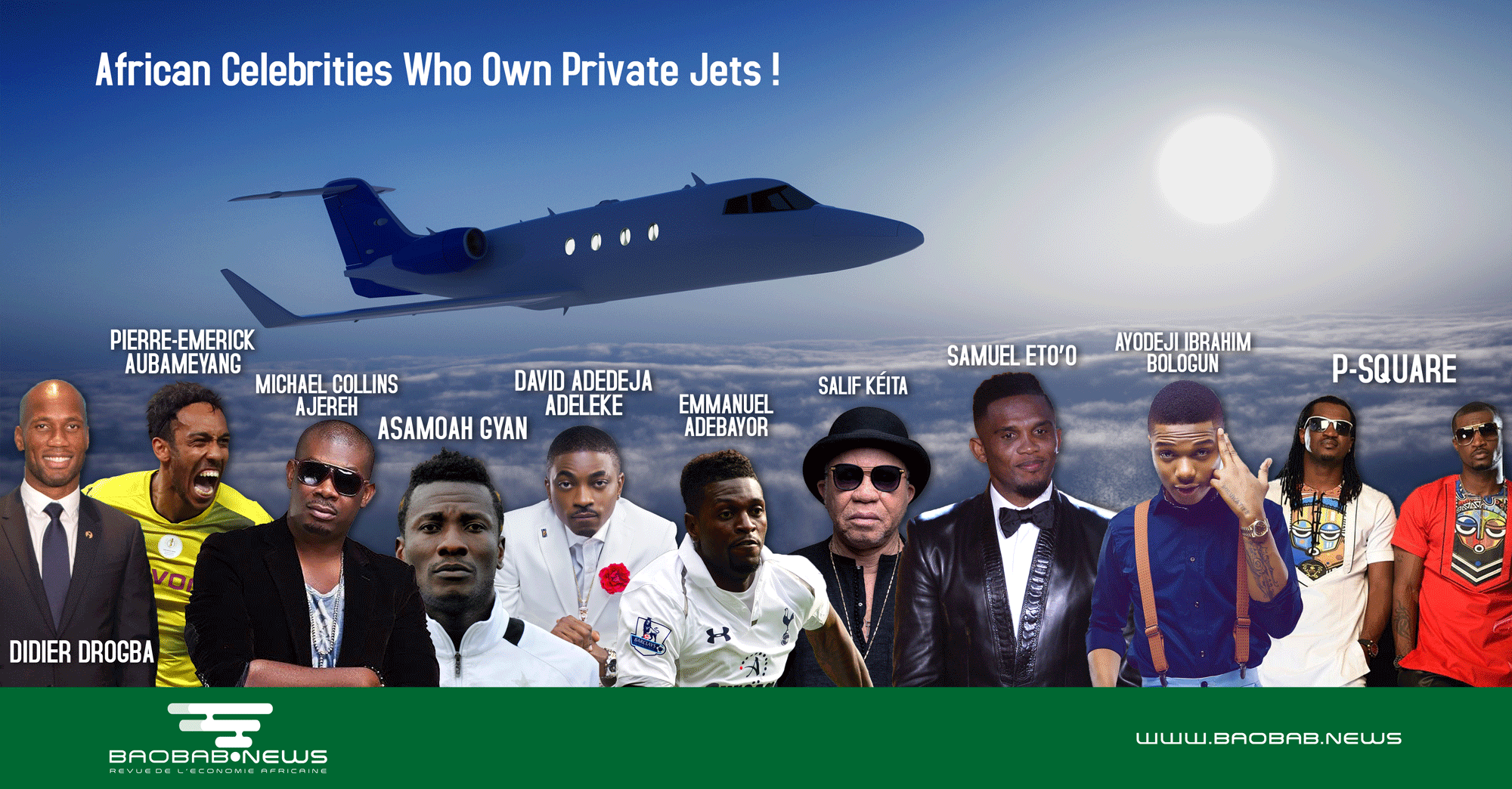 The economic slumps in Africa are very high and most people depend on daily earnings to survive but that is not obstructing the rich and famous in the societies most often celebrities and business gurus from cruising in luxuries.

Gone are the days when owning a private jet was the prerogative of the European and American celebrities. Rightnow most Africans celebrities have joined the contest.

Didier Drogba, the best scorer in the history of Ivory Coast (104 caps, 65 goals), put an end to his career which led him to Marseille, Chelsea, Istanbul (Galatasaray) or in Montreal. A spectacular and charismatic forward, the one who won a Champions League in 2012 has become a listened voice.

Samuel Eto’o has long been one of the most popular players in Africa. These days, he plays for the Turkish club Antalyaspor and he regularly publishes pictures of himself on his private jet.

Last October, the legend of Ghana launched its own airline called “Baby Jet Airlines”. Turkey’s Kayserispor striker has long been one of the highest paid players in Africa and at one point he was the highest paid African.

We had to include this Ghanaian player on our list because of many conversations and pictures of his “jet” online. The famous striker is currently playing for Kayserispor and the national team of his country. His leading career has led him through various professional FCs, such as Udinese, Sunderland, Rennes, Al Ain and Shanghai SIPG.

This football star was born in Togo. Emmanuel Adebayor has played for many famous clubs including Manchester City, Arsenal, Real Madrid and Monaco. He currently represents Istanbul Basaksehir FC and his Togolese national team.

This professional striker was born in France, but his father was captain of the Gabonese team. No wonder, the son followed in his father’s footsteps and also joined the Gabonese national team. The famous number “14” is currently playing for Arsenal, but the career of this football player has led him through different FC, including Milan, Monaco, Saint-Etienne and many others.

Aubameyang travels the world regularly in a private jet. The Gabonese striker could fight for form this season alongside his team, but he is still one of the best strikers in the world.

All of these players are rich and loved by millions of fans around the world.

Currently, the Nigerian music industry is led by Davido and a few other artists. Born David Adedeji Adeleke, Davido has published hit songs such as “Fall”, “If” and many others.

In addition to showbiz richness, Davido was born into one of Nigeria’s richest families and helped him acquire a nice private jet.

Although Wizkid did not come from an affluent family like his great rival Davido, he is now one of Nigeria’s richest musicians.

He began his musical career at the age of 11. The 27-year-old Nigerian singer-songwriter has also acquired his own private jet.

Don Jazzy is the Ghanaian version of Hammer, except he is better and much richer. Born Micheal Collins Ajereh, Don Jazzy is one of the most popular Nigerian record producers. He is also singer, songwriter and businessman.

He is the CEO of Marvins and co-founder of record label Mo’Hits record away from 2004. Most of the famous Nigerian artists have gone through Don Jazzy and he is rich for it and has purchased a private jet.

From the time when PAUL and PETER OKOYE were still inseparable in the P-SQUARE duo, they were the first Nigerian or African artists to buy a private jet. Jet which has also served in the clip title BANK ALERT.

The singer Salif Kéïta offers a private plane dubbed “Cheval Blanc” with a capacity of 6 seats including 4 passengers. This will allow the king of man-crazy music to make his moves in the sub-region in this Z-TYM device.